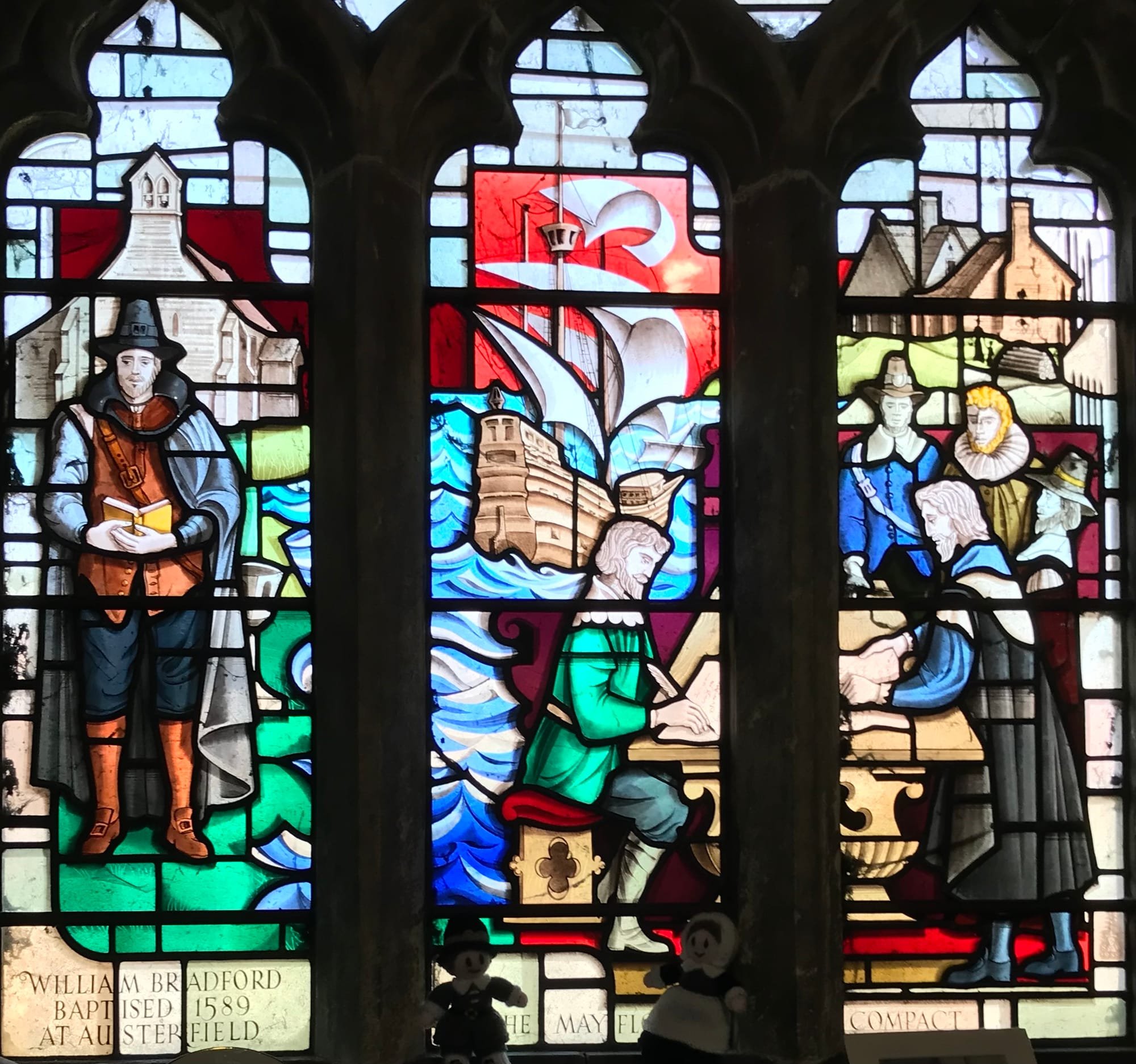 The Pilgrim story is a complicated one that reflects the challenges facing Elizabethan and Stuart England.   In the 16th, 17th and 18th centuries no European country could image multiple faiths existing in its realm.  The church was the mirror of society and the lynch pin of the stability of the kingdom.  The kings counted on the religious leaders to reinforce their rule.   While Elizabeth had begun her rule with the dictum of not looking into windows of the soul, the constant Catholic pressure caused her to say enough to any one disagreeing with her church and rule.  Radical Protestants were also a thorn in her side and faced to some degree the same fate as the Jesuit missionaries-   imprisonment and death.  When Mary Queen of Scots was executed, she needed a scape goat.  She found one in the person who carried the death warrant to jailers.   While Davidson had been a promising diplomat, he fell from grace barring with him his assistant William Brewster.   Brewster returned to his home in Scrooby where his father had been the post master.  The post master was the person charged with caring for the horses and lodging of the royal mail carriers.  Scrooby had been one of the chief manors of the Archbishop of York.   But with fall of Cardinal Woolsey, it became simply a royal post along the Great Northern Road from London to York.  Davidson along with many other leaders were moderately Reformed in their theology.   With Brewster's loss of position,  he became more radicalized in Reformed outlook.   The more radical reformers through out England had several points of tension with Elizabeth's church: bishops with their hierarchies and courts, clergy vestments, the Book of Common prayers with specified prayers and church Holy Days,  and the signing of the cross after baptism.   These issues began to fester in the hearts of the Godly as they named themselves.   Finally, they began to have private worship groups and ignored their parish church.   The Brewster family and the Jackson family, who also lived at Scooby Manor, they began to attend worship at nearby Babworth church.   When the pastor was ejected from this church, they began to worship at Scrooby Manor except when compelled to worship at the Scrooby Parish Church.   In 1608 Brewster and Jackson fled to Holland to escape the charge of "Brownism" which would have resulted at the least to major fines or at worse execution.

The Dutch Years and Preparation to Emigrate to the New  World

From 1608 until 1620 the Godly increasing sought religious freedom in Holland first in Amsterdam and later in Leiden.   At least one family who came of the Mayflower remained in Amsterdam,  the William White family.

Theologically, the Separatists became heavily influenced by the increasingly radical Calvinist  Dutch Reformed Church. The Dutch Reformed Church had gradually lost its more accepting attitudes replacing them with a Calvinism of the TULIP variety: 1. Total depravity ;  2. Unlimited Election; 3. Limited Atonement; 4. Irresistible Grace ;  5.  Perserverance of the Saints  While the Dutch were organized into regional grouping of clergy,  the Separatists true to their name wanted only local control by the individual congregation.   All decisions were made by the covenanted members of the congregation

There began to be a fear among the English Godly  that their children were becoming more Dutch than English.   The Dutch government had placed many restrictions on them as to employment and worship.   The final piece was the fear that the truce between the Dutch and the Spanish would end with a potential war.   These  fears  caused them to prepare to emigrate to Virginia in the New World.   Pooling their resources with additional investors in England, they bought a small ship the Speedwell.   They also contracted to hire the larger ship Mayflower to carry them to Virginia.  They worked with their friends in England to be given the right to emigrate.  After several false starts they left England on September 16th being forced to abandon the leaky Speedwell.   The most current research by Robert Anderson concludes that the majority were the Godly (Separatists) with some merchant adventurers and hired hands.   No one is sure exactly what the Mayflower looked like, but it was an old merchant ship.  Caleb Johnson's website mayflower history.com has detailed articles about the Mayflower.    Who were the passengers and some of the crew?  Please see the next article. 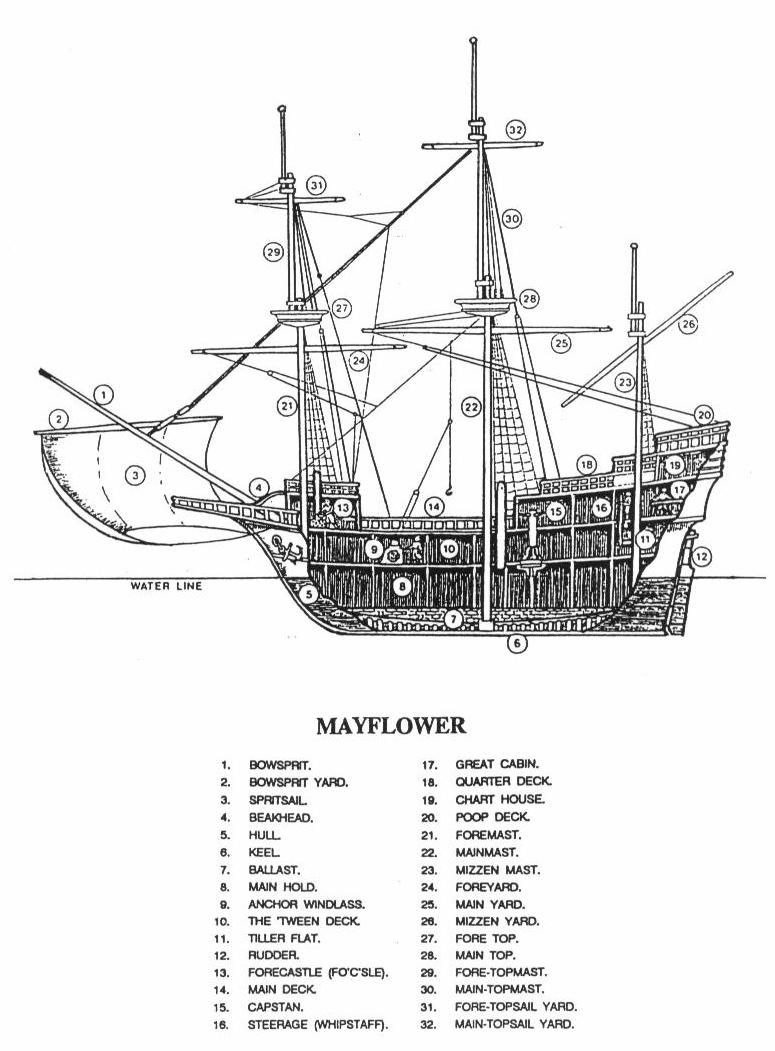 A recent blog posting on the New England Historical and Genealogical Newsletter will help keep our dates straight.   The blog is by Tamura Jones.   Please see the credit following the chart.