The Voyage and the First Year 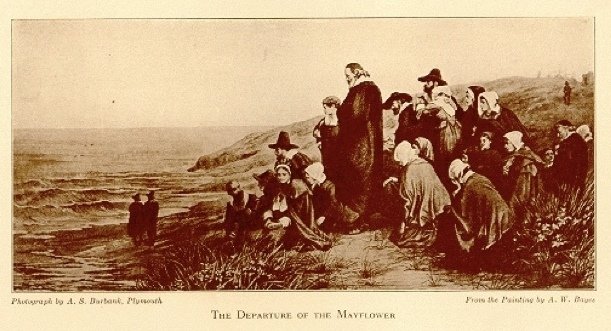 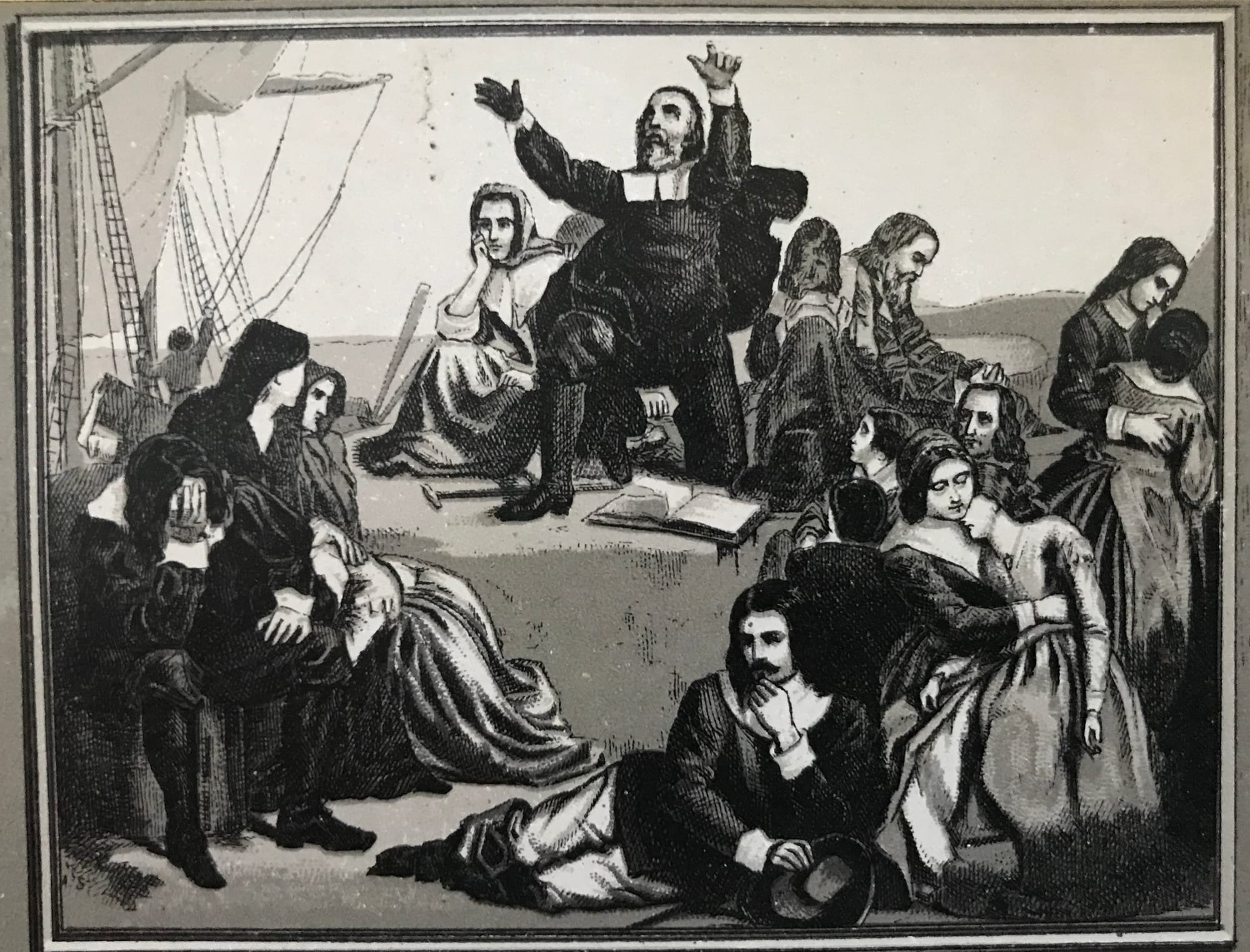 The Departure of the Pilgrims

by Charles Lucy at Pilgrim Hall

August 1, 1620 is the most important date for Mayflower descendants especially those descended from the Leiden group.   All other dates pale.  On August 1, the Leiden group boarded the Speedwell at Delftshaven and began the voyage.   This Leiden group would be using the new Gregorian calendar.   Once they reached England, the calendar would have been reset to Julian calendar which was ten days behind.  The Julian calendar would be the Pilgrims’ calendar and American colonists calendar until the 18th century.  The calendar was not only off by ten days but the new year would be celebrated on Lady’s Day or the Feast of the Annunciation March 25th.   But Holy Days meant nothing to the Pilgrims.   Easter, Christmas, as well as popular Saint Days were soon to be ignored and forgotten.   When the Speedwell met the Mayflower in Southhampton.   The Mayflower had already been boarded by the London group.  Unfortunately, after the Speedwell and Mayflower set sail, the Speedwell began to leak.  The Pilgrims were forced to out at Darmouth.   The food stocks were being consumed at a fast rate.   After the repairs the ships departed and made roughly several hundred miles, the Speedwell began to leak again.   The Speedwell belonged to the Pilgrims while the Mayflower was merely hired.   When they abandoned the Speedwell at Plymouth, England, the Pilgrims lost a major investment. 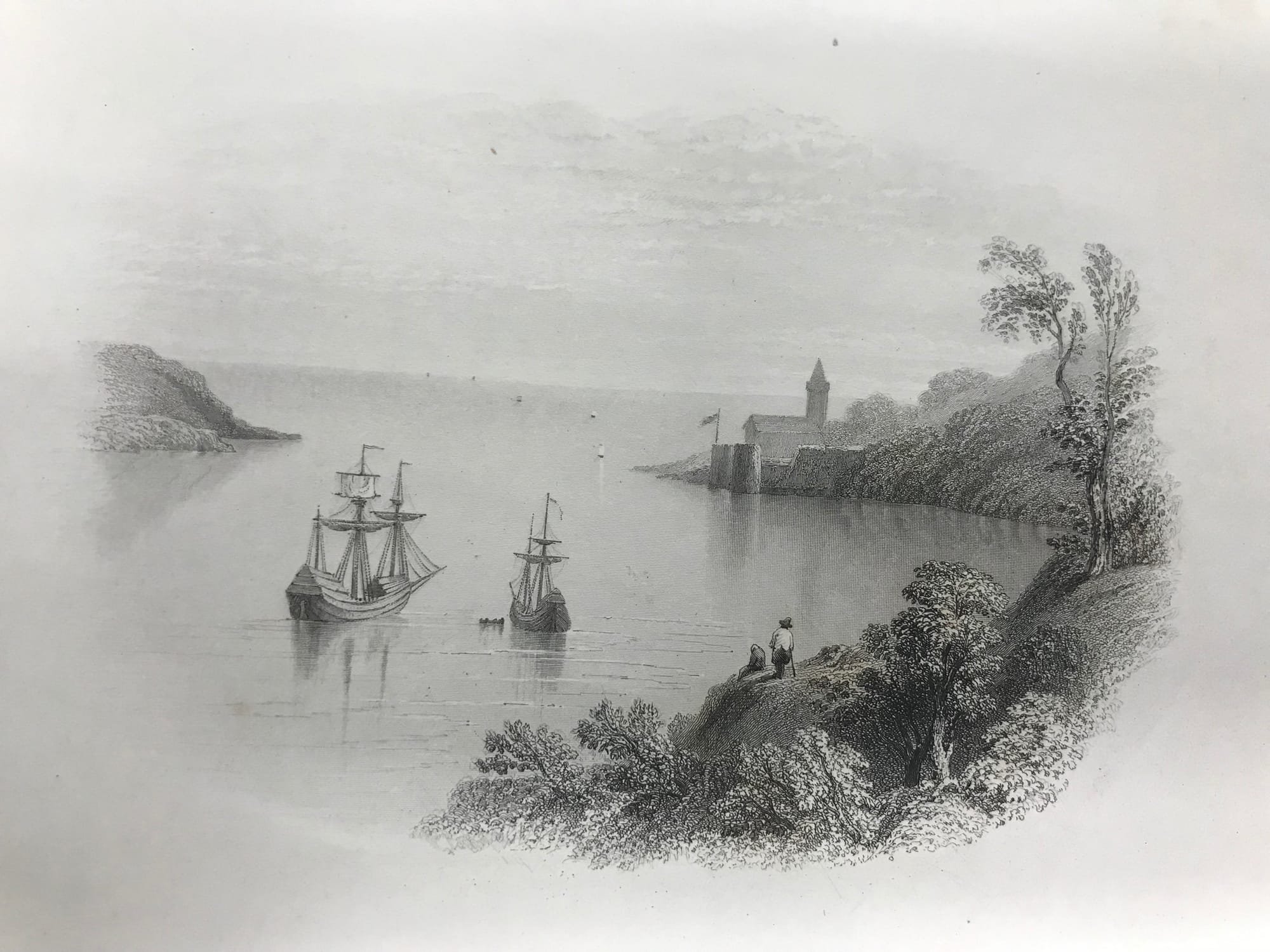 An 1854 etching of the Mayflower and Speedwell at Dartmouth Harbor

In the Speedwell were several families who decided not to travel on. Among them were the William Ring family, the Thomas Blossom family and the family of Robert Cushman,  William Ring died in Leiden. It took his widow Mary Ring until 1629 or 30 to arrive at Plymouth. The Inventory of her estate demonstrates the vivid colors of clothing worn by the “dour” Pilgrims, books read and treasured, and assets owned.  She lived in Plymouth only three years before she died.

The rest of the voyage was anything but calm and relaxing.   On September 6 (Julian calendar) September 16 (Gregorian calendar)  the Mayflower began its actual trip to the New World.   In the midst of a storm John Howland, a servant of John Carver, either fell or was washed overboard.  He caught hold of a rope and was pulled to safety.   Bradford saw this as God's providence.  On the other hand, one of the bitterest sailors toward the Pilgrim who laughted at their illnesses and generally cursed them daily.   Yet, the Pilgrims cared for him as he was dying.  But he was not spared Bradford's judgment that God's hand smote him with a "grievous disease."   When he died, he was buried at sea.   In the final analysis, an equal purportion of sailors and Pilgrims  (Leiden or London) would die before the return of the Mayflower to England.   As their English and Dutch Calvinism would dictate, no one knows the will of God in this life.  After more than two stormy months at sea, they saw the eastern side of now Cape Cod.   It was not the land they were expecting; the settlers pressed the crew for northern Virginia where their charter was valid.   At present day Chatham the shoals forced them to turn back to the end of the Cape.   They let down their anchor on November 11 in Provincetown Harbor. 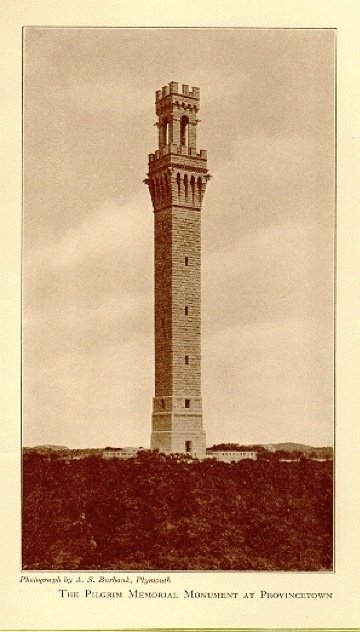 Being thus passed the vast ocean, and  a sea of troubles before their preparation ...  they had now no friend to welcome them, nor Inns to entertain, or to refresh their weatherbeaten bodies, no houses, or much less towns to repair to, to seek for succor...."

May not and ought ^not^ the children of these fathers rightly say, "'Our fathers were Englishman which came over this great ocean, and were ready to perish in this wilderness, but they cried unto the Lord, and he heard their voice, ' and looked upon their adversity' , &c. Let them therefore. "Praise the Lord, because he is good; & his mercies endure forever, Yea, 'Let them which have been redeemed of the Lord, shew how he hath delivered them from the hand of the oppressour, when they wandered in the desert wilderness out of the way, and found no city to dwell in; both hungry, & thirty, their soul was overwhelmed in them.   Let them confess before the the Lord his loving kindness, and his wonderful works before the sons of men.' " 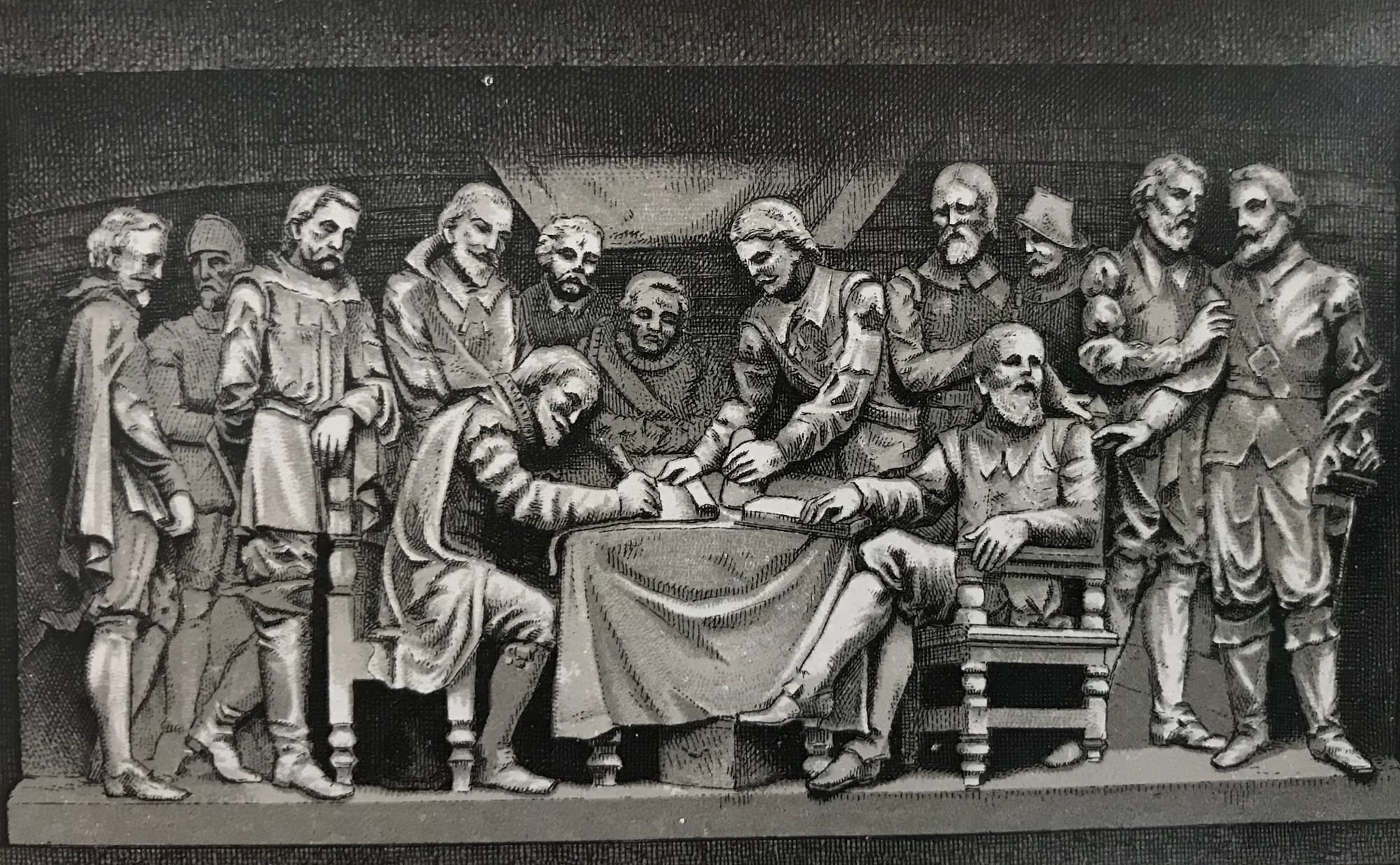 In Provincetown Harbor the Pilgrims realized that they had to develop some sort of structure to govern them.  If they arrived in Virginia their charter would have been valid and their would have had a Royal governor and assembly.   Now nothing was valid; so they developed what would become known as the Mayflower Compact.   For more information  please refer to the Reasons for the Compact Section.   And John Carver was chosen as governor.

Food and beer were running out.   They found and plundered two grave sites.   One contained an iron kettle which they filled with probable seed corn. Pilgrim Landing Trail Monuments    Their intent was to return the kettle and replace the corn.   (They Knew That They Were Pilgrims, p.69) Pilgrims with the help of the ship's carpenter were able to reassemble the shallop to explore their new world, at least the Cape and the harbor. 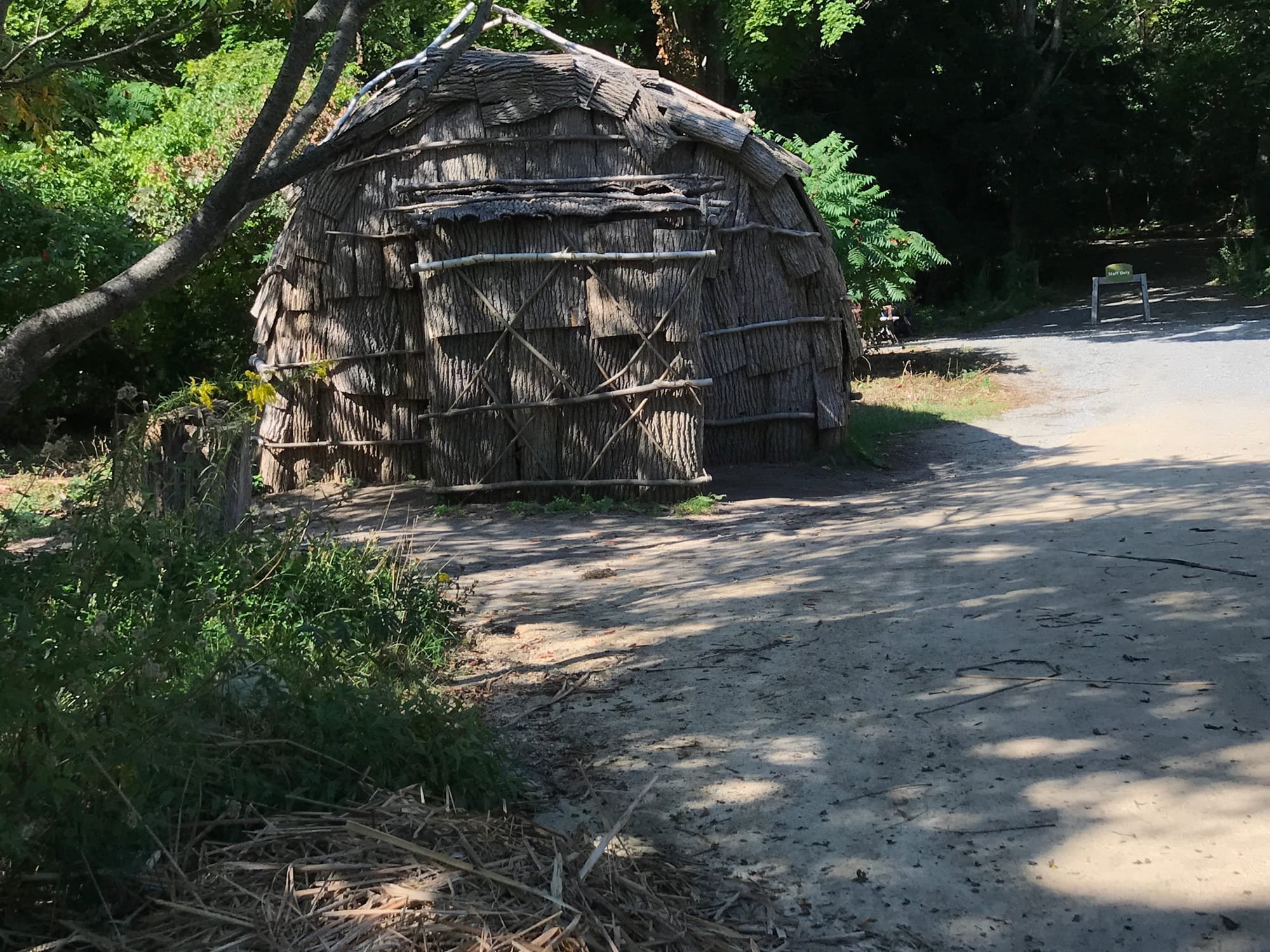 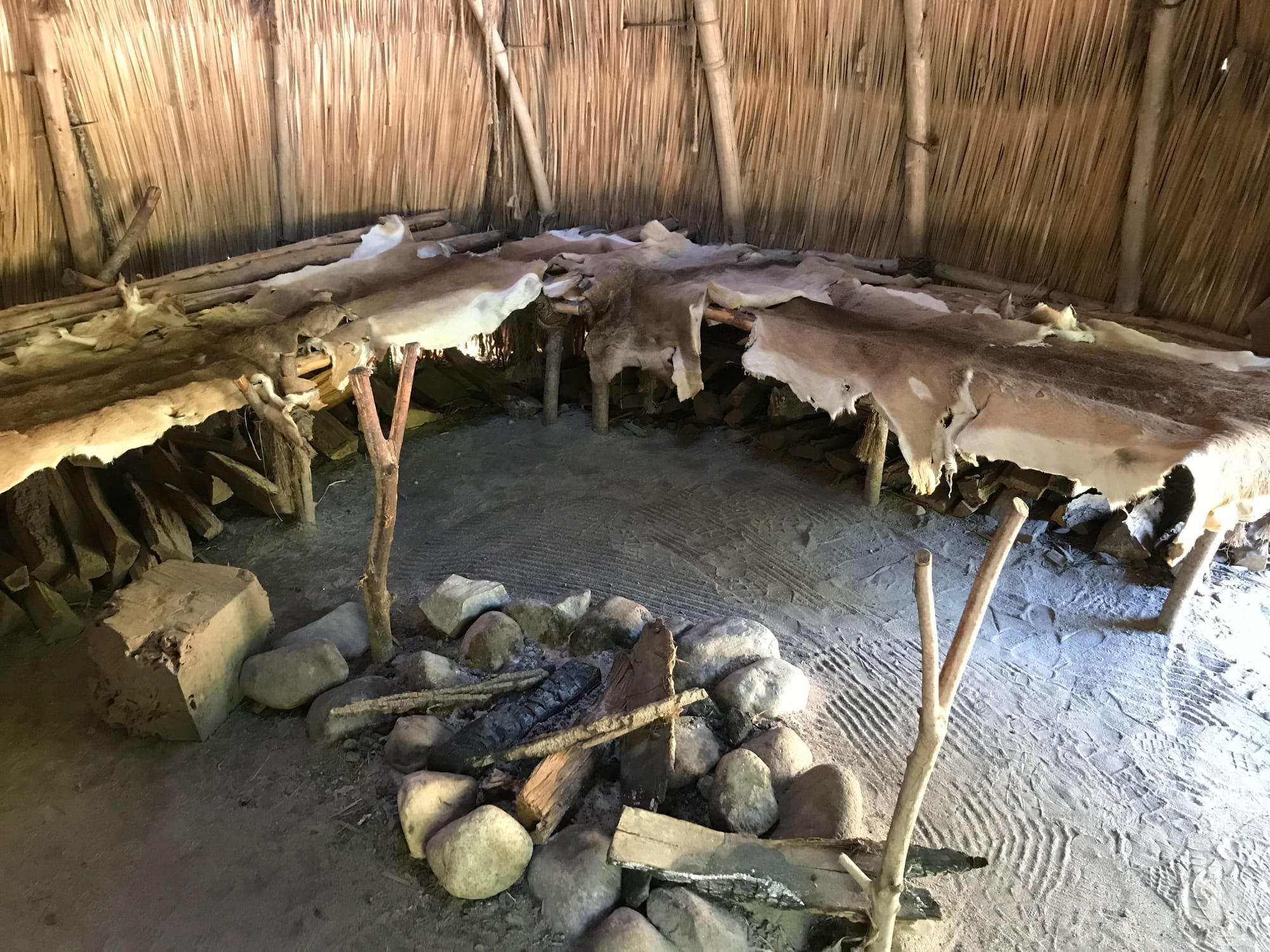 The Mayflower pilot Mr. Coppin directed them to a good harbor where he had been before.  After spending a cold wet night, they warmed themselves on Clark's Island and resting on the Sabbath.   On Monday morning they continued their explorations and found the  abandoned village of Patuxet.   The village was deserted because almost all of the inhabitants had died of European introduced disease.  There were corn fields, water brooks and good harbor for ships.   Weighing anchor on December 15th, they left for Plymouth and arrived on the 16th. (Of Plimoth Plantation, p.188f) 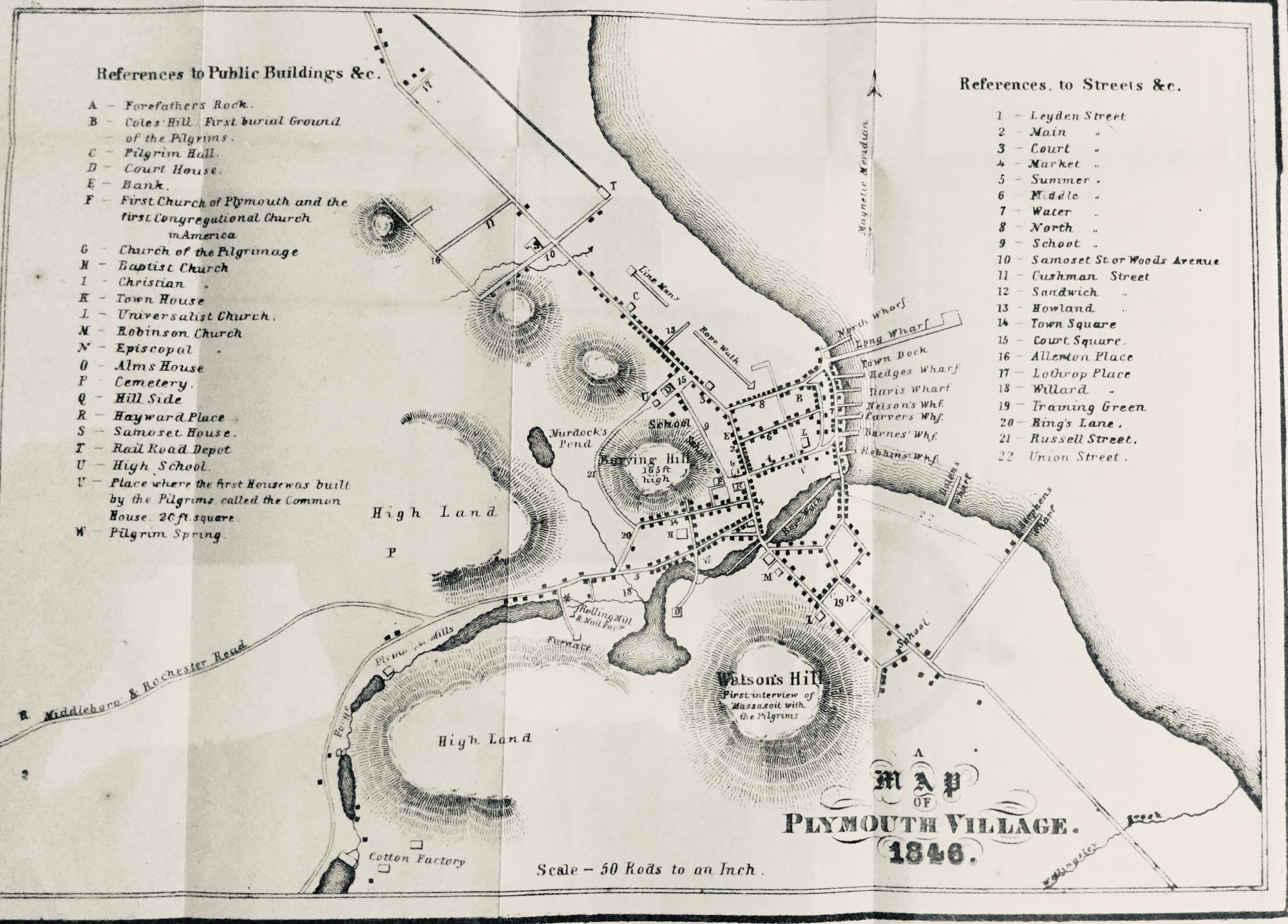 In these hard and difficulte beginigs .... But that which was most sadd and lamentable was that in 2 or 3 months time halfe of their company dyed, espetialy in Jan: and February, being the depth of winter, wanting houses and other comforts; being infected with scurvie and other diseases, which this long voiage their inacomodate conditioned brought them; so that as ther dyed 2 or 3 of a day in the aforesaid time; that of the 100 and odd herons, scarce 50 remained. And of these in the time of most distress, ther was 6 or 7 sound persons, who to their great comendations be it spoken, sparing no pains, night or days but with abundance of toyle and hazzard of their owne health, fetched wood, made them fires, dress them meat, made their beades, washed their lothsome cloaths, cloathed and uncloathed them; in a word did all the homly and necessarie offices for them which dainty and quesie stomoachs cannot endure to hear mentioned; all this willingly and cheerfully ....

Bradford's remembrances years later still echo the dire straits of that First Winter.  Death and privation were the markers of the day.   The colonists of Virginia experienced the similar losses and fears, but Plymouth had the hope that God would bless their enterprise.  Death would continue to face the Pilgrims although at a much lower rate.    The Pilgrims saw God's providence when Samoset walked into the Plymouth in mid March speaking English.  He became their translator, their guide and their means of introduction to Squanto, Massasoit and their tribe.  Squanto taught them the traditional means of farming and fishing. While April seemed like the beginning of the future, it also was the end of the life Governor Carver. He probably died of heat stroke.   His wife  died only weeks later.   Even in the midst of the losses the Pilgrims laid out the path that would guide their future.   They chose William Bradford as governor, Isaac Allerton as Assistant , Miles Standish as military leader while William Brewster served as Elder.   May saw another mile stone: the first wedding.  Edward Winslow and Susanna Jackson White were married in a civil service following the Dutch example.

Edward Winslow became the representative to the Wapanog people and even learned their language.  He was dedicated to establishing a long mutual relationship with them.  He realized a weak, struggling colony would need friends and mentors.  When 16 year old John Billington becomes lost and found by the Wapanoags, the door was opened to repair some earlier damage.   Winslow agree to aid the Wapanoags in case of war with other native peoples, to replace the stolen corn. 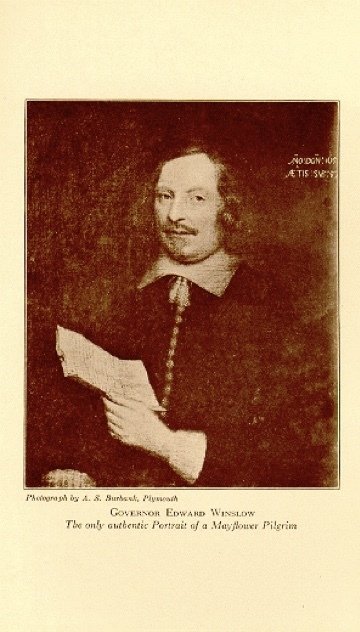 The proof of the new relationship is the first Thanksgiving with most pf the meat being provided by their new friends.   While it was never the often portrayed meal, it was an example of the future. The earliest agreement between Massasoit and the Pilgrims on 22 March 1620/21would survive to be the longest unbroken treaty between Native People and what would become the United States.   But when it was broken, the King Philip War would become a tragic omen of future wars.